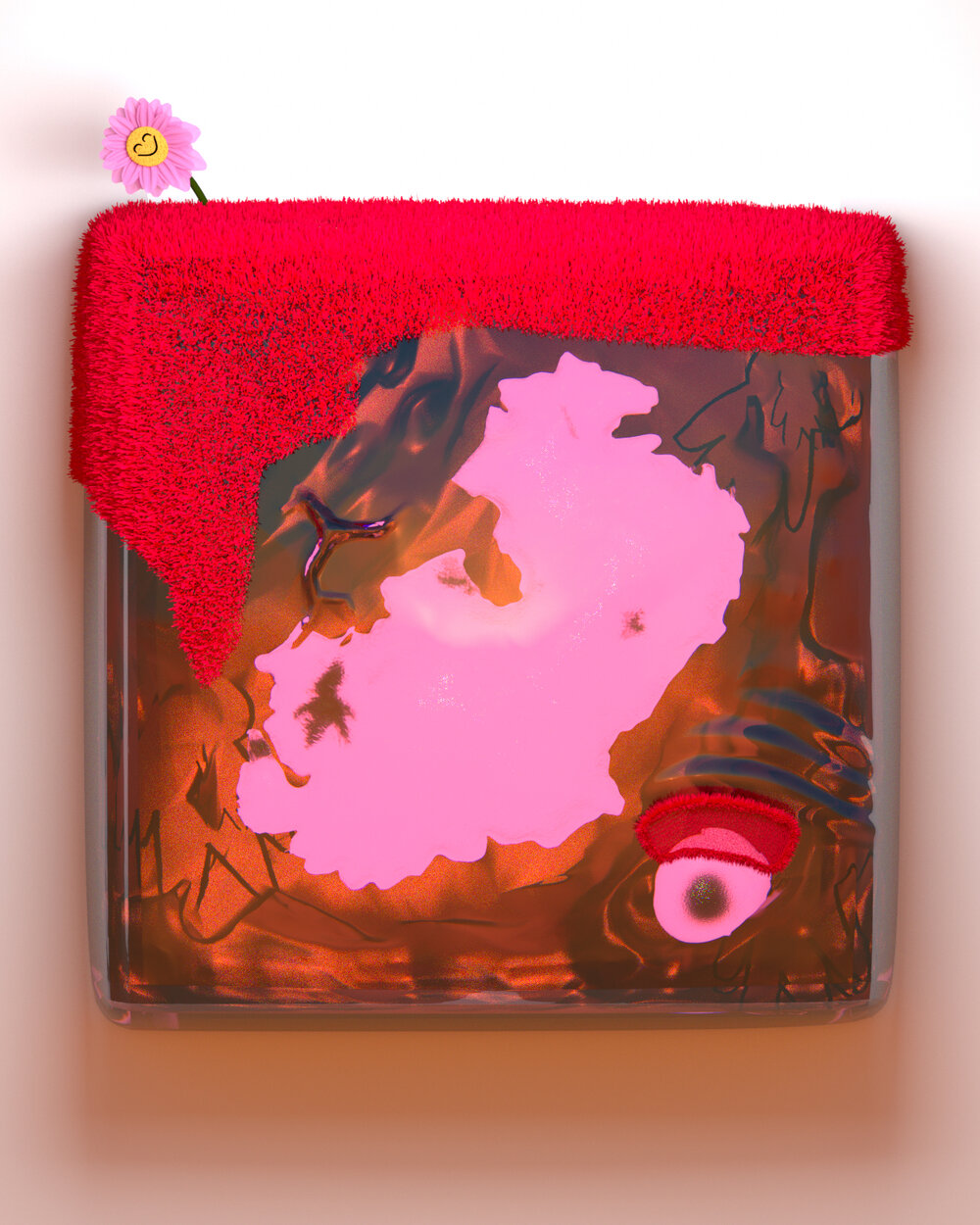 Describe the type of work you make and what motivates you.

Between both my digital and analog practice, my work can be described as vibrant, playful and expressive. What motivates me to make work in this style is a sense of escapism from the mundane nature of everyday life - not only for me, but for the viewer as well. I generally aim to inspire feelings of joy or nostalgia through the work’s formal elements, even if the subject matter originates from opposing emotions.

Can you tell me about your early days of art-making? Were you creative as a kid?

I feel like I’ve always been really creative, ever since elementary school, I would love art class, that would be my favourite subject, and even if the project was super basic, like the colour wheel, I would just be so excited about it, like “Oh my God, complimentary colours, wow!”

Do you remember anything that you were drawn to in particular?

I feel like in school I was always just up for anything, but at home, I was obsessed with cartoons. We had Cartoon Network and that was like, my goldmine. I’d watch The Power Puff Girls, Dexter’s Laboratory, Codename: Kids Next Door, all those good shows, and I’d try to copy the styles, and make fan art and fan fictions and all that stuff. I had my own TV in my room, it was one of those small like, box TV’s you got at Walmart, and I would just watch whatever I wanted when I got home from school, and I’d be drawing on the side, too. So I feel like that’s what I was drawn to most—drawing and storytelling. 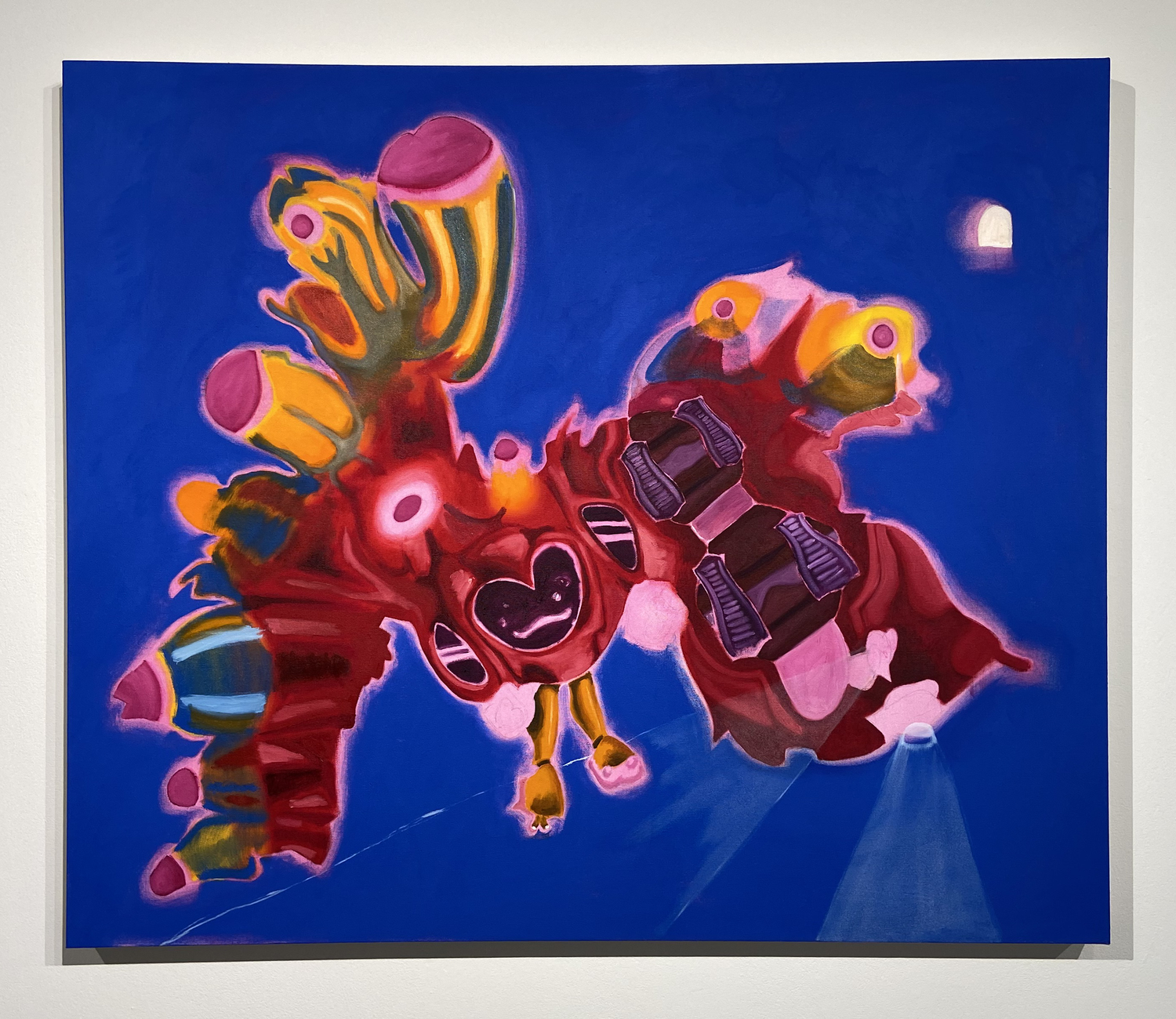 How about later on, how was your time at OCAD? Did you know you were going to go to an arts university?

Well, I started out on a different path. Originally, I’d wanted to go to OCAD or an arts school, but my parents were encouraging me to do something else, because you know… being in the arts is not necessarily “stable”. So, I ended up actually going into architecture at Ryerson, and yeah, I didn’t even last a full year. It was so intense, like academically, and I didn’t take a break after high school, and I just felt burnt out because I’d worked so hard in highschool to get really good grades in order to get into this program, and when I got there, it just wasn’t what I thought it would be. It was a lot more academic rather than creative. There was some creativity, but I felt like a lot of it was hindered by how structured it was, which I really didn’t like, so I dropped it.

Were you happier at OCAD? What did your time there look like?

The first few years were kind of tough, not going to lie. I think I was just – I wasn’t paying attention to my mental state, and it was kind of taking a toll through out my time in university and I just wasn’t acknowledging it, or like I didn’t know what was happening. So that really affected my time at OCAD. But I felt like what I gained from my time there was beneficial. I was able to develop a style that’s really my own, and a practice that’s my own, I don’t know, I’m just very comfortable in my artistry now.

Can you describe your painting process a bit? What goes into making a finished piece?

First, I usually lay down a base coat with spray paint or thinned oil paint to achieve a hazy first layer. From there, I either sketch out a composition I’ve already made in my sketchbook, or I use a more freestyle approach. Recently, for my first solo residency at the Robert McLaughlin Gallery, I used digital processes as a point of origin for my paintings. I deconstructed 3D models of human-like figures and collaged the resulting shapes together to form compositions. The colours used in my compositions aren’t thought out beforehand, I decide on them as I progress through the painting. When I know a painting is finished, it’s just a feeling as opposed to a percentage of completion or a standard to meet.

When did your drawing and painting turn to you starting to work digitally?

I’d say around my second year at OCAD. I don’t know, I was always like playing around on the computer, ever since high school, like with Tumblr, but it was very basic, like making gifs on Photoshop and stuff. And then I would take it to the next level by like making my own handmade animations, around like 2016. I would just make animations frame by frame and then scan them into my photoshop, and then digitally colour them, and throw some music on top. It would take days, but like, I was so into it. And I don’t know where the shift came from. I think once I started learning about Cinema 4D I was like, “Oh, this is the wave”. And then I started to fuse drawn animations with like 3D shapes and stuff, and it just wasn’t really blending seamlessly, so then I kind of just transitioned right into 3D. But I still like to incorporate hand drawn elements into my work sometimes, for textures and embossing… 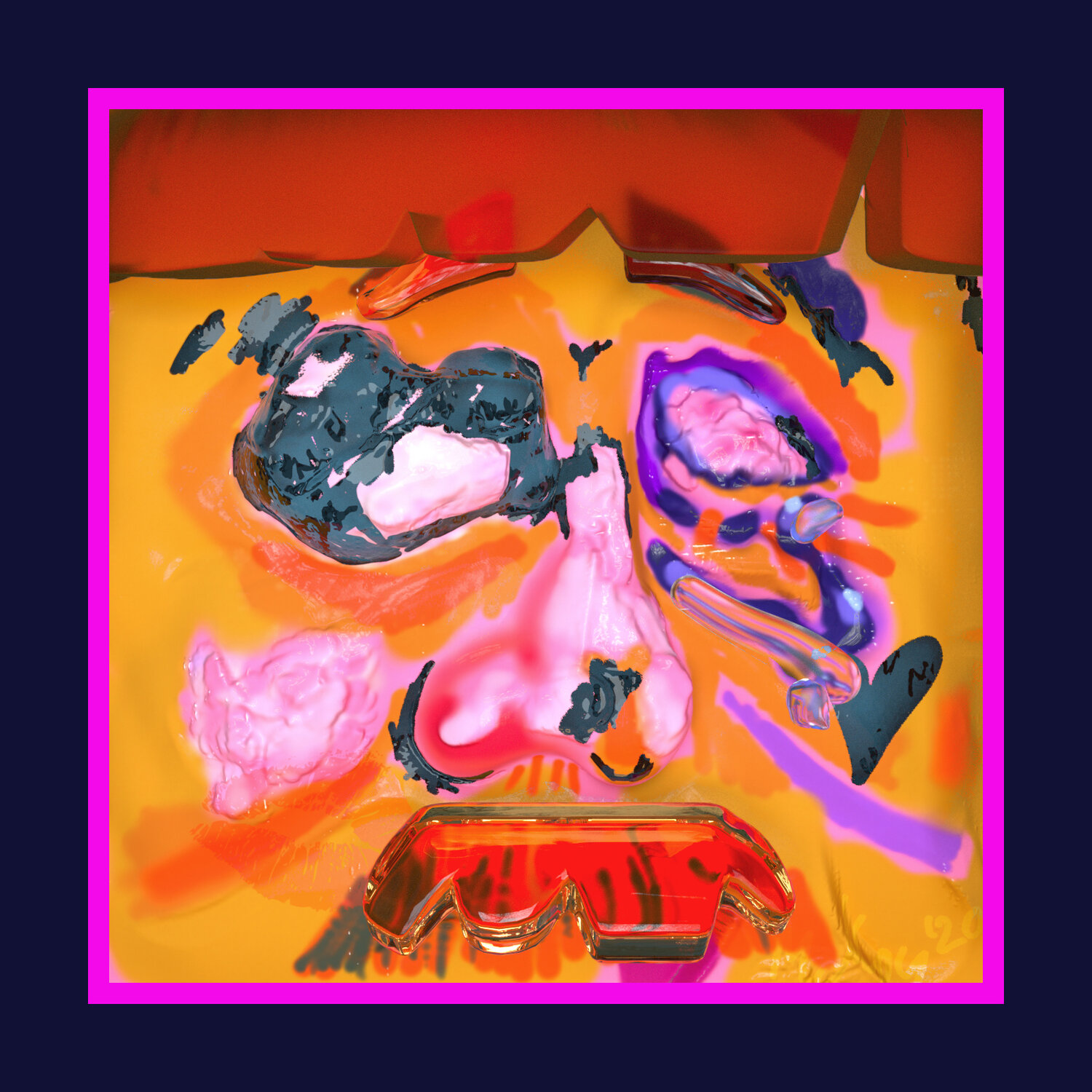 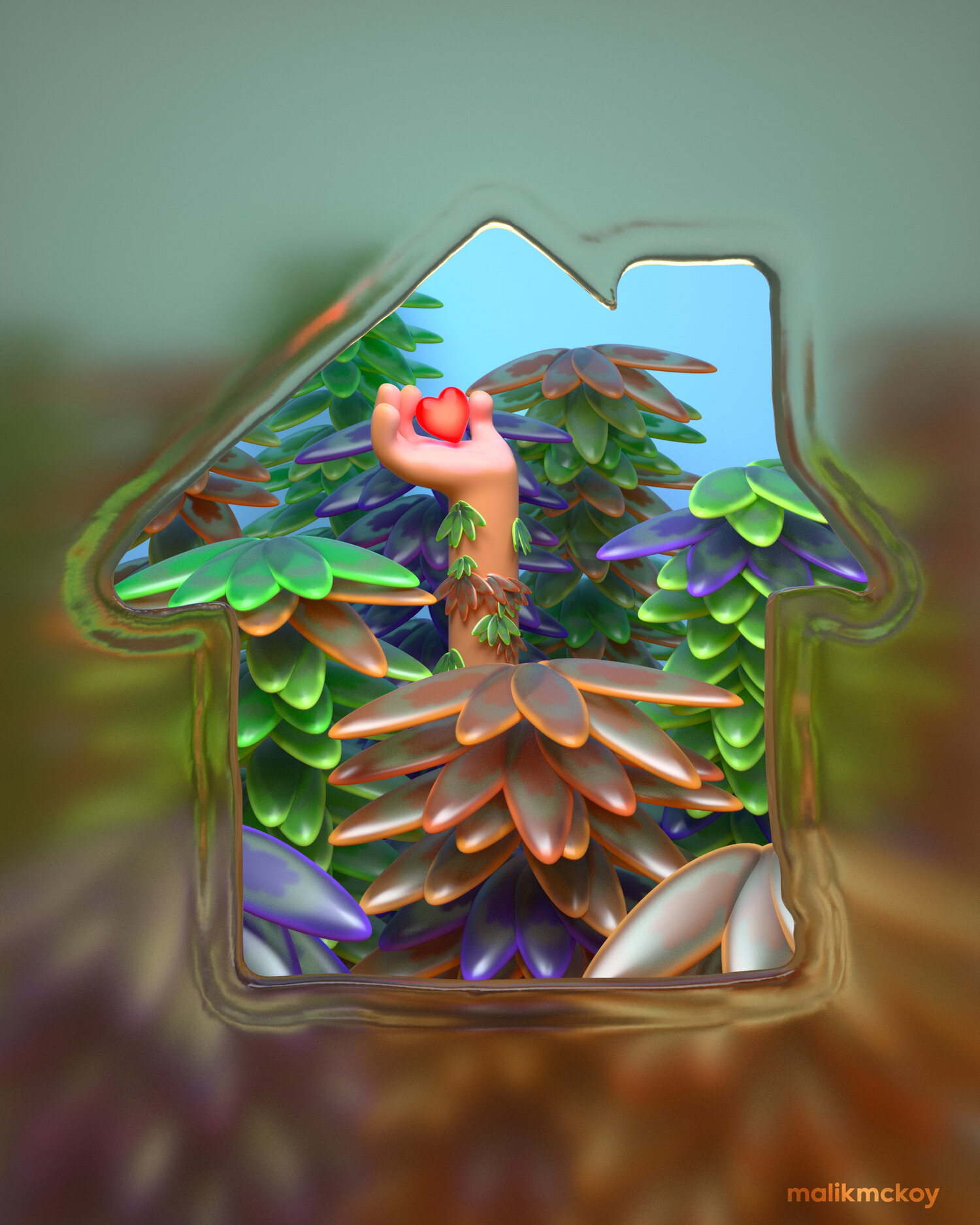 "Take opportunities to not only work on your practice, but to plan and research different pathways."

‍Can you explain that process a little bit?

You know how in Photoshop you can like emboss things, to make things look like they’re engraved in something? With the 3D stuff, you have something called texture maps, so the normal texture map applies either raised or recessed textures, so I would use—like in my latest piece at the Xpace exhibition—I used notes from my journal, scanned them onto my computer, and then converted that into a normal map, so that it could create a raised texture on a flat surface, and then applied a gloss over it so you could see the light reflecting off the raised texture of my notes.

Yeah it’s really cool, the more you learn about processes like that you’re like “Oh, I can totally elevate my art to the next level with this cool little trick”. And usually like normal maps are used to achieve a really realistic kind of texture, but I kind of use it for the opposite, I use it for like abstract, like very weird things.

Are there any artists that you’d say are influential to your style?

What do you do when you’re not making art?

When I’m not making art, I’m usually watching a series, listening to music, or reading. These days I’ve been watching Girlfriends, as well as listening to the Sibling Rivalry podcast and digging through their catalog of recordings. In terms of music, I've been loving albums from Kehlani, Mahalia, Victoria Monet, and Tinashe. Aside from that, I’ve recently decided to learn how to code to expand my skill-set. 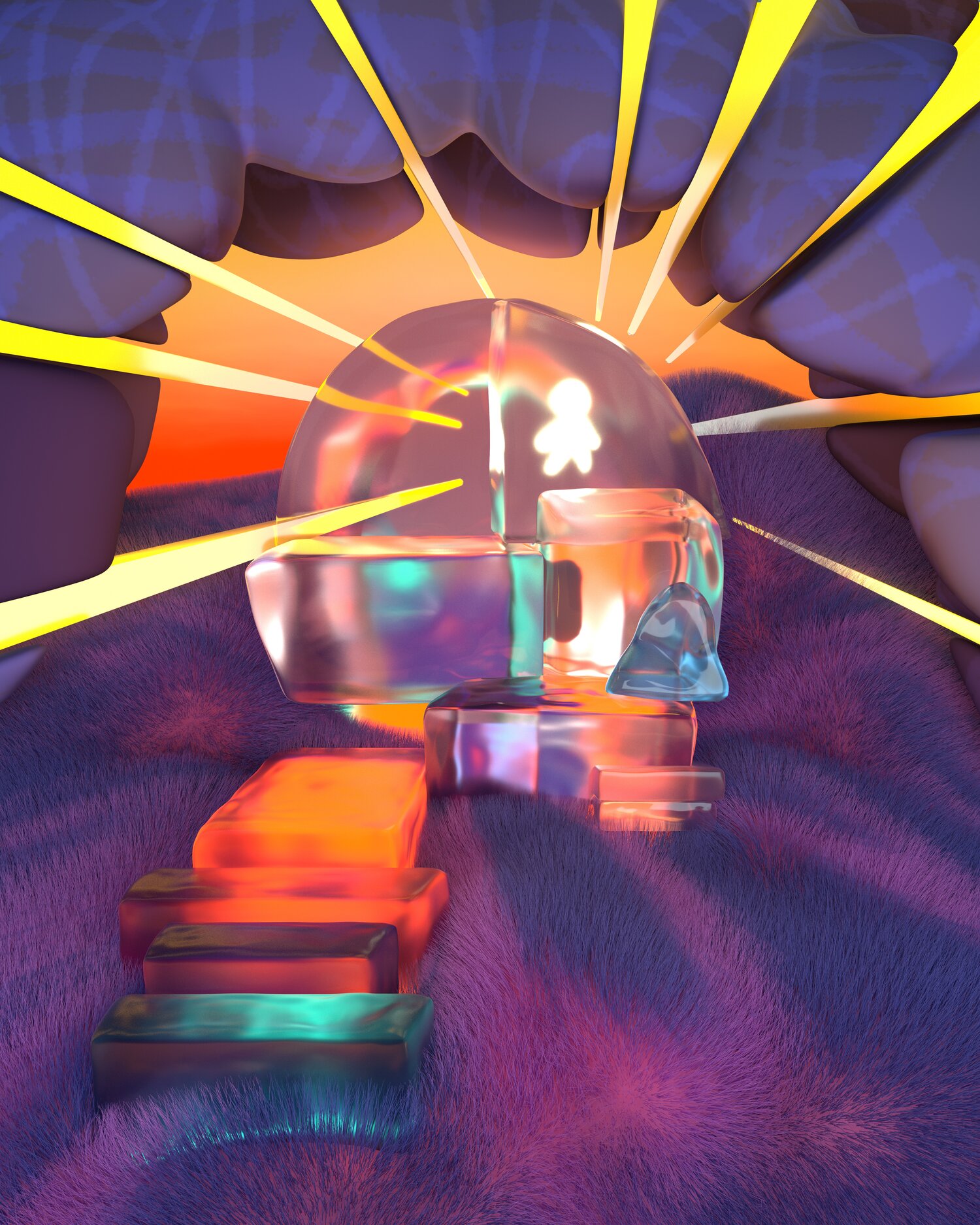 ‍How is learning to code?

I’m doing it very much at my own pace, it’s not like I’m enrolled in anything, so whenever I can or whenever I feel like it, I just hop on a website and do a couple of lessons. I like it, it’s very cool. It actually makes me feel like…it’s what Tumblr me thought I was doing.

That’s cool. So after OCAD, you went to Seneca?

Yeah, for Game Art and Animation... It was jam-packed. At the beginning I was really liking it, but then Covid hit, and as the months progressed, I was slowly losing my excitement, just because the amount of work we were doing was a lot, we had a lot of projects to do, a lot of modules, a lot of deadlines to meet,and they weren’t easy. It was like high technical, industry-standard stuff. And, as I mentioned before I don’t really like structure, but I will say, I did gain a lot of skills from that program that I can use toward my art practice, which I’m proud of and grateful for.

That’s cool. So after OCAD, you went to Seneca?

Yeah,for Game Art and Animation... It was jam-packed. At the beginning I was really liking it, but then Covid hit, and as the months progressed, I was slowly losing my excitement, just because the amount of work we were doing was a lot,we had a lot of projects to do, a lot of modules, a lot of deadlines to meet,and they weren’t easy. It was like high technical, industry-standard stuff. And, as I mentioned before I don’t really like structure, but I will say, I did gain a lot of skills from that program that I can use toward my art practice, which I’m proud of and grateful for.

What’s something that you learned that you use now?

I guess the way I approach building models has changed a lot. It’s a lot more optimized, a lot more clean. Because before I was just doing anything, and it wasn’t necessarily the smartest way to approach my work and achieve what I wanted. So the workflows that I learned in that program helped me a lot and saved a lot of time. And the texture maps and the normal maps that I was telling you about, that’s been really helpful and influential in my painting practice lately. I’ve been experimenting with a lot of that, like texture mapping, compositing, playing around with game engines, seeing what I can do with that to make interactive stuff that I can put online. Yeah, it just opened an avenue which I’m excited about. There are lots of little pockets I want to explore. I keep picking up skills, like coding, the gaming aspect, and many other technical skills, so, we’ll see...

Any words of advice for artists that might be just starting out?

I encourage any emerging artist to put their work on social media as much as possible. Visibility on social media is more important than ever now. Make sure it's a mix of process work and work that you're really proud of. In my opinion, it’s attractive when an artist’s page is curated with intent. Invest energy into your brand, because others will believe in it if you do. But also, take opportunities to not only work on your practice, but to plan and research different pathways. I say that because are so many possibilities that we may be unaware of and it’s important to be able to adapt. Think of your time researching as your in cubation period. 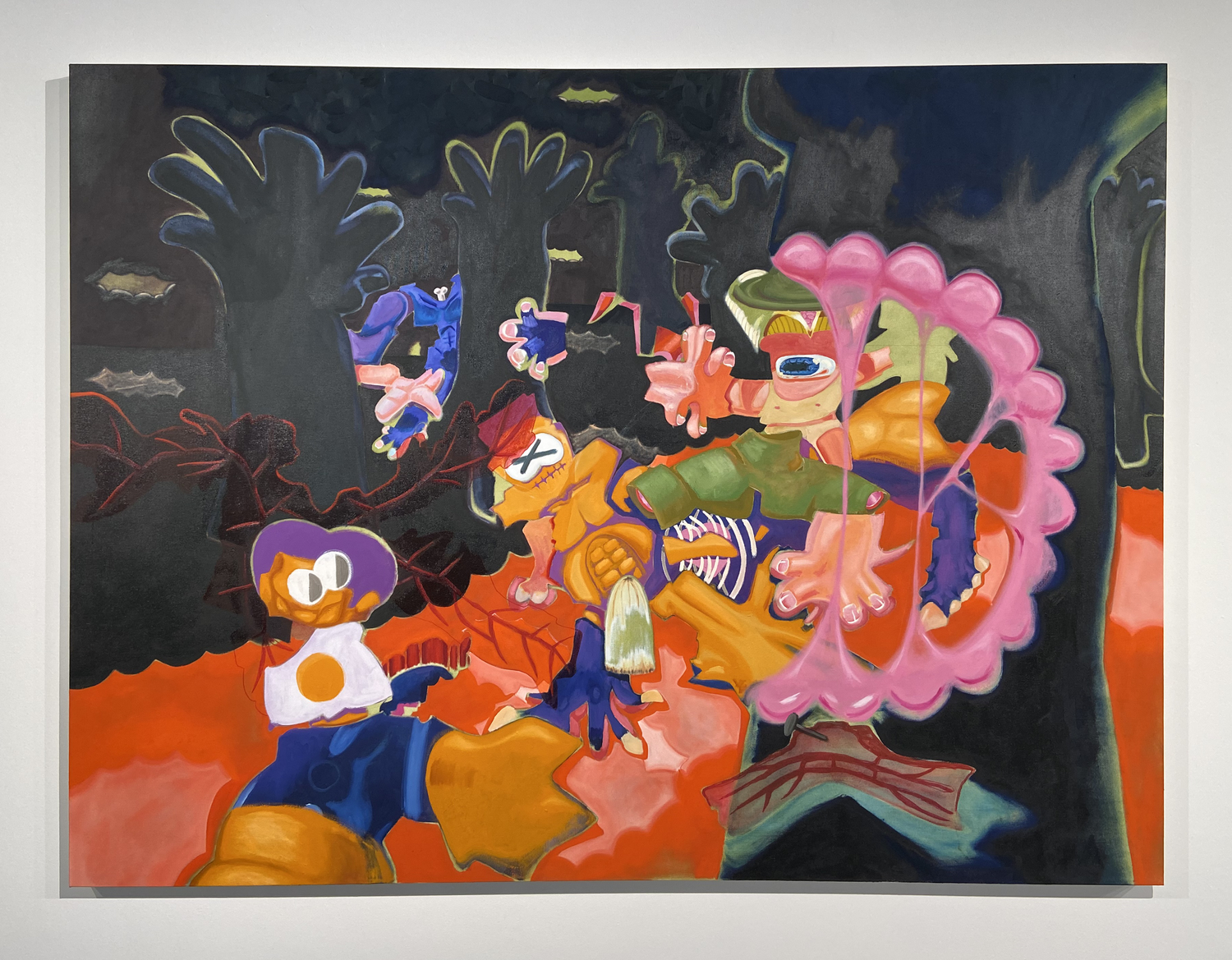 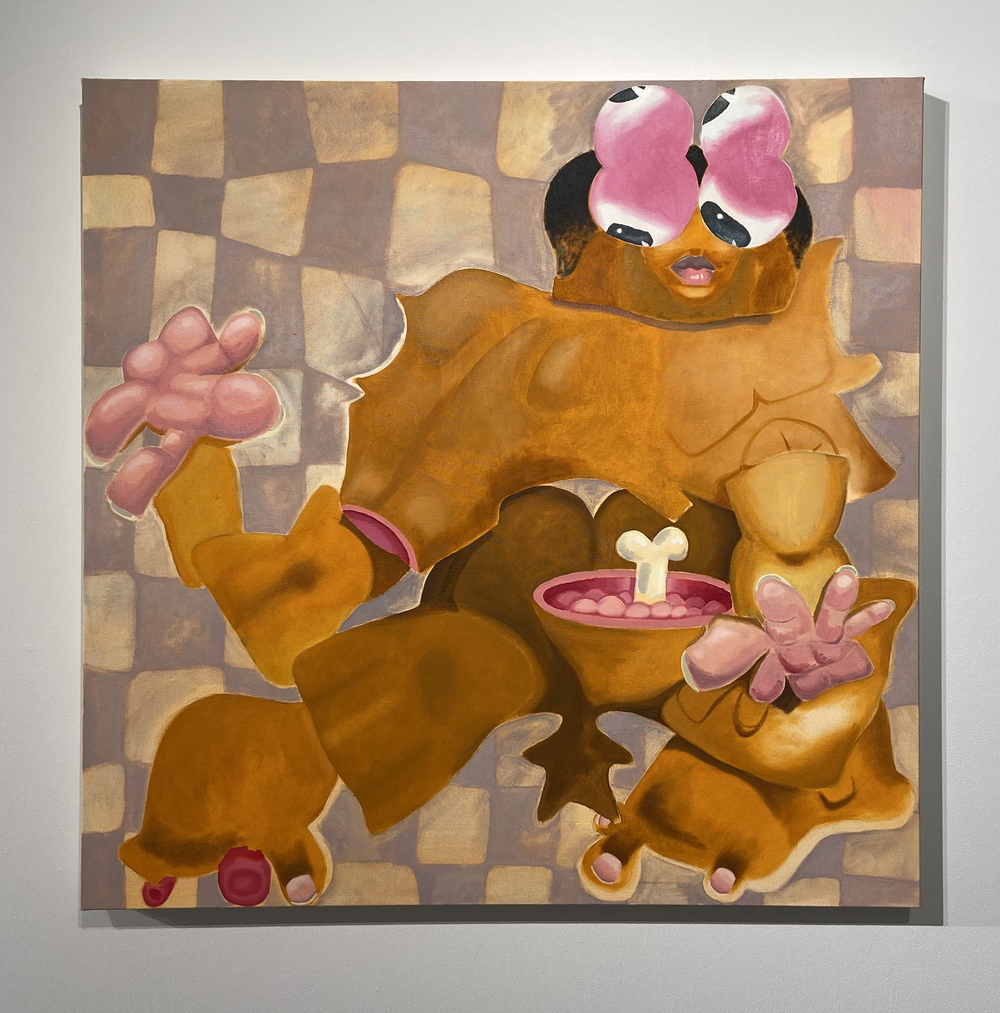 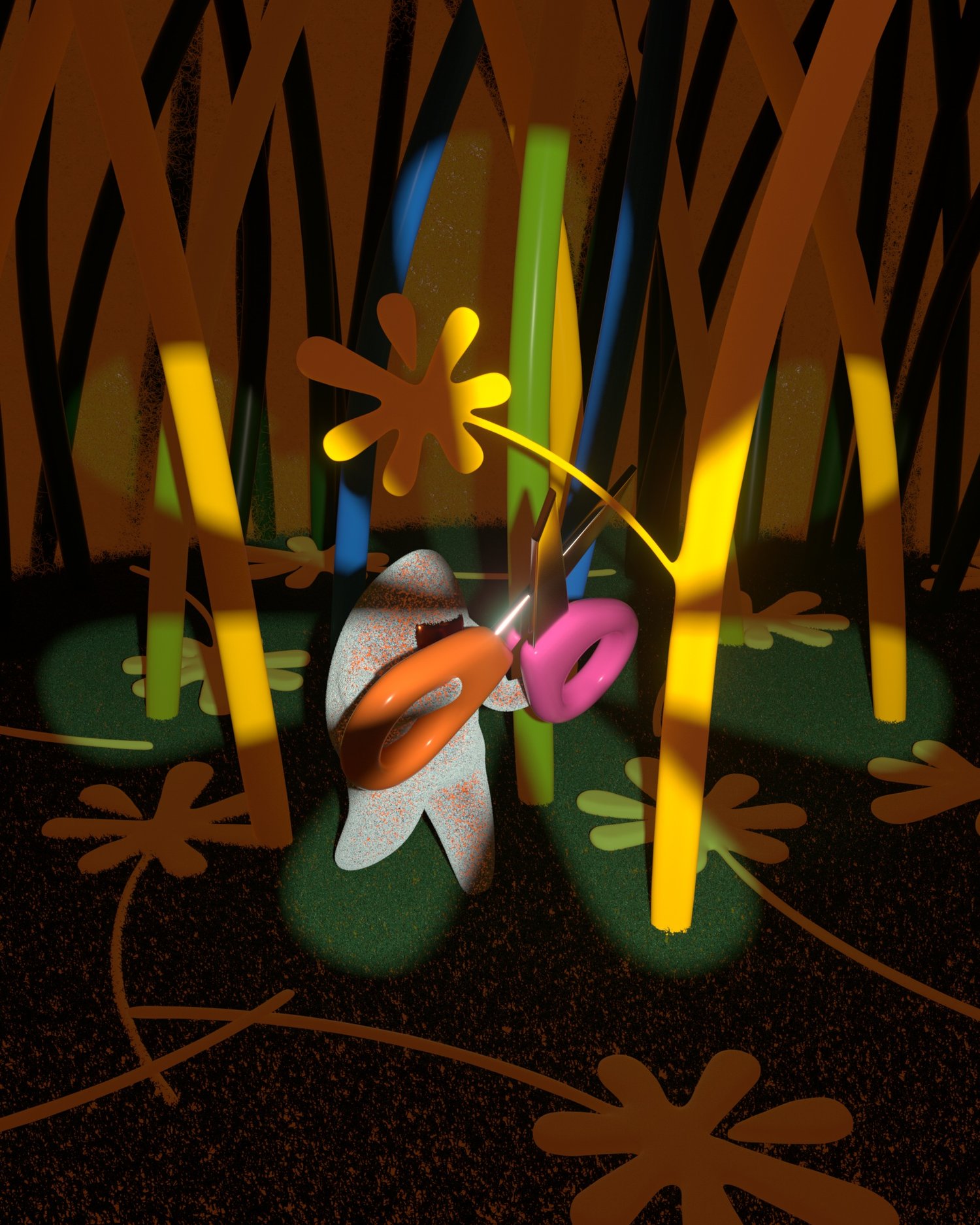