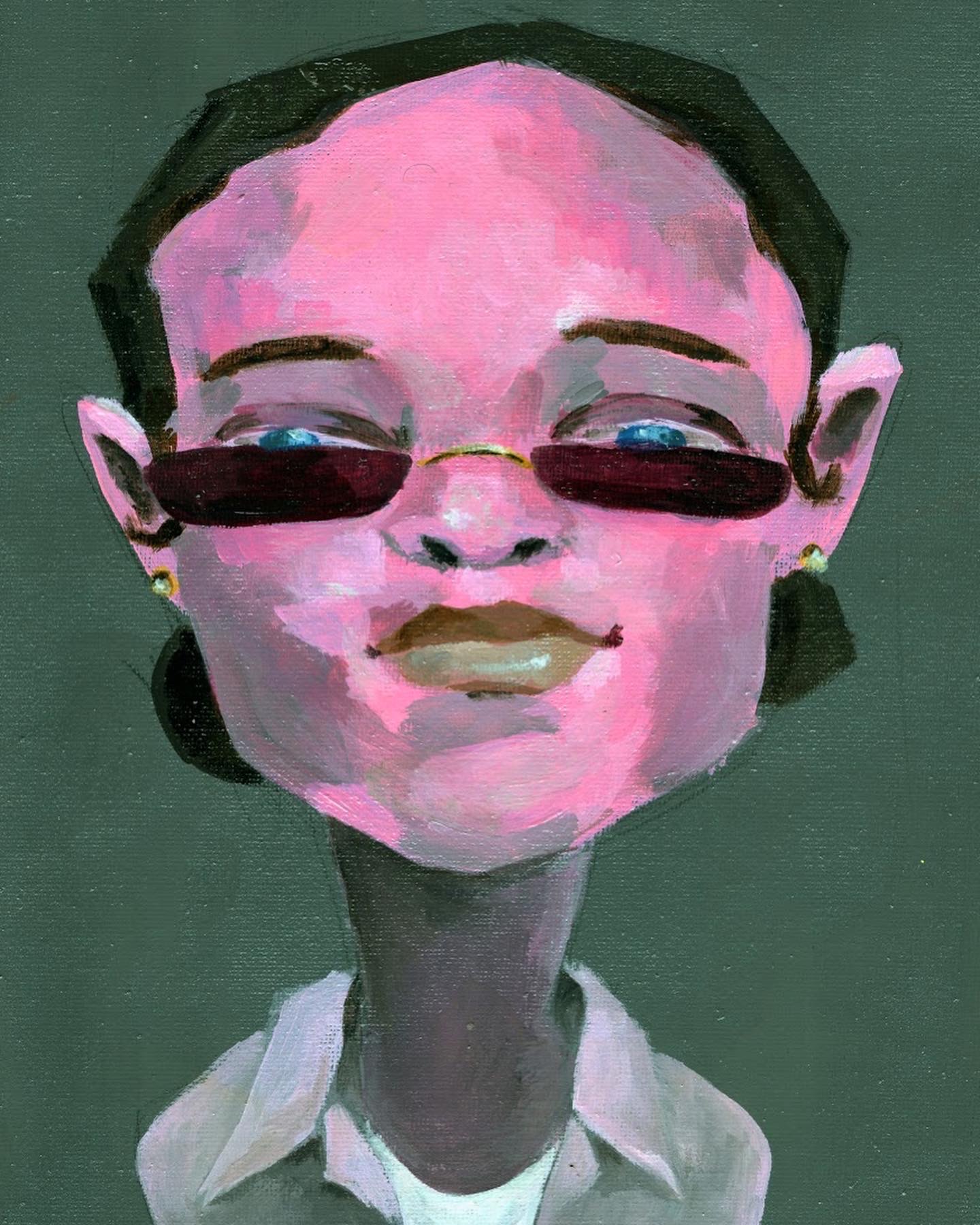 Can you describe your work?

My work is like – there’s an entire universe that exists in my head, that’s this world, but mirrored – it’s all Black people, and it’s mostly bad bitches, you know? It’s either bad bitches or well-dressed men. It’s kind of like a record of my life now that I can look back when I’m old.

I’m very inspired by the city. In my work I like to incorporate stories of people around me, things I know, that are close to home. I know if I make work that connects to who I am, it will reach those who it’s supposed to reach. I mostly use acrylic, because it dries quickly. You have to blend fast when you work with acrylic, but I work fast, so it works for me.

What are some of your inspirations/influences?

I watched a lot of TV as a kid. Shows like Flight 29 Down, Radio Free Roscoe, Life with Derek, Naturally Sadie. That’s why I’m doing this now. I want to eventually transition more into film, I want to make movies. I want to be the Black female Tim Burton. I actually worked with a guy who did the claymation work for The Nightmare Before Christmas and Coraline. I did an album cover for my friend Amindi (@amindi), and she was doing a virtual performance, and the production company wanted to put another element on their online platform to make it more engaging, so they made a claymation of my paintings of her album cover.

What else are you working on these days?

There’s been a bunch of projects that I’ve been wanting to do, that I finally have the time for, and I’m finally getting the money to do. I’m going to make a plush toy, I’m going to embroider clothes in my style, etc…

Were you always creative?

Yeah, since I was a child. You know how there were those children’s shows that would teach you how to make stuff? I took it to another level – I was obsessed. Any craft I could get my hands on, I would. Origami was my shit!

Where else do you draw inspiration from?

Just existing, I have a very fun life. My life is like a movie. I’m very much a follow my heart type of person so I really follow my heart. I’m a very open human being, I like to keep a flow through life.

TV also. I’m so grateful – when I was younger, there was a small bigback TV in my room, and there was cable hooked up to it. My auntie moved away and she left it for me. And I watched so much TV. I would finish my homework early, so I could watch TV late into the night. That was my escape. I didn’t really like growing up in Jamaica, because Jamaica is a hard place, but it was a very nice escape. And cartoons when I was growing up – top notch. I was a very excellent student also, so going into art, I definitely had to make some choices. I used to do biochemistry and physics. I was going to become a doctor. I did biochemistry and physics all the way until grade 13. But I didn’t like the people, it felt draining. And I could draw. But we had this thing called flame test labs – where we’d burn different metals and each would produce a different colour flame. Iron is green, copper is blue, etc. There’s so much crossover. Because science and art are both about nature. I paint from my environment, so if I know how my environment works, I can paint better. I also love campy 80s movies, like Killer Clowns from Outer Space, Earth Girls are Easy, Beetlejuice, the original It with Tim Curry. Beetlejuice is my favourite movie. One day I have to meet Tim Burton… 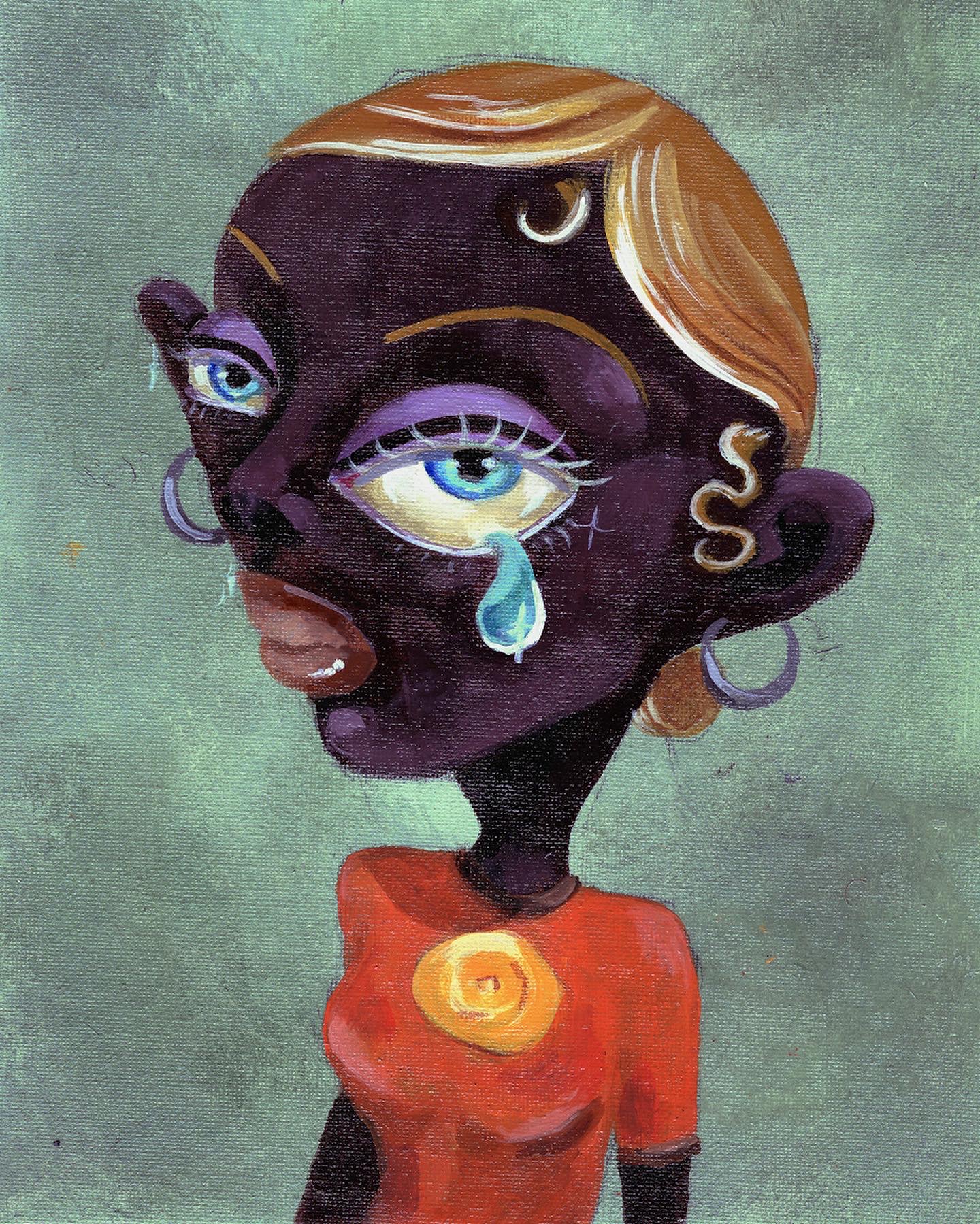 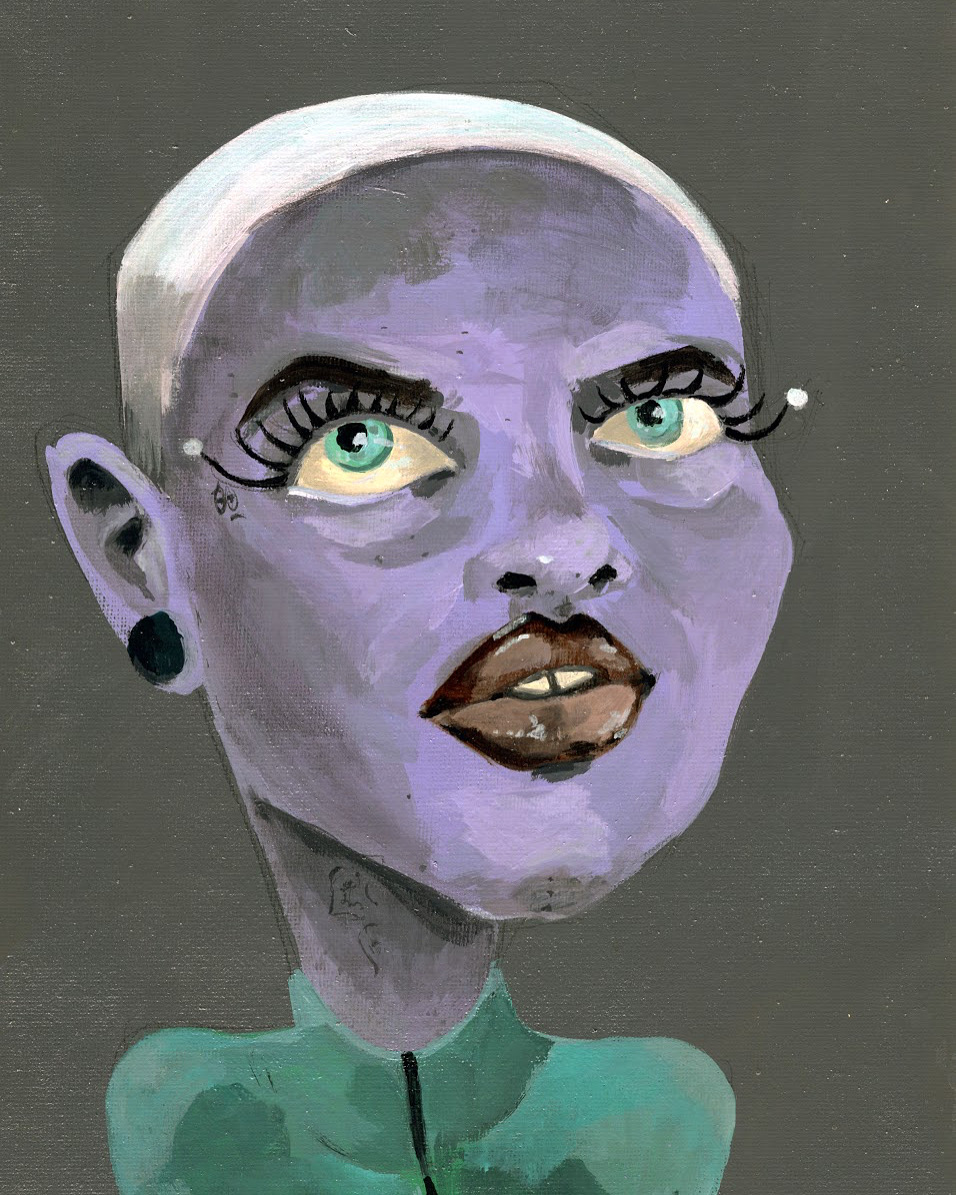 "Existing in my mind is very fun, because anything I see in the world, I can repaint it in my style.

Is there anyone else you look up to?

My grandfather is an artist too. He makes leather crafts, but he used to be a postman, he became an artist later in his life. Everyone thought of him as sort of a slacker. But I’m like “No, that’s not what it is!”. He was my first picture of what an artist looked like.

I draw inspiration from everywhere, not just visual artists. I take a lot of inspiration from Missy Elliott. She does Blackness in a way that I’ve never seen before. And I think I have synesthesia, I’m pretty sure, because when I hear music, I see colours and very intense visuals. So, when I listen to her music, I can where in my world it would fit. Existing in my mind is very fun, because anything I see in the world, I can repaint it in my style.

Do you usually listen to music when you paint?

Anything in particular lately?

Yes I’m glad you asked. Green Tea Peng – when I started listening to her music my entire aesthetic changed. I felt myself transition more into the type of person that I wanted to be. Her music is so good.

Do you have any pieces that felt like game changers for your style/work?

Yes, it’s of my friend Choice. He dresses so well. We met up once and he came in dressed so well, and his energy is so nice, I was like, “I have to paint you”.

How do you connect with other artists etc.?

All my work I do over the internet. As a child I was very fascinated by the internet. I was so obsessed with the internet – I was a bit of a nerd. I was not always this hot, so I figured being smart would be my thing. So, I just researched everything – anything I could get my hands on.

How has your practice changed over time?

It’s gotten so efficient. I could do this with my eyes closed at this point. But it took years to get to that point.

How did Covid affect your practice?

Amazingly – Covid made my life so much better. I feel like so many creatives flourished in Covid, because the real world broke down, but we were never apart of the real world to begin with. People were looking to us, like “what are the artists doing?”. At the end of the day, we are moving the tide. It’s always been us moving the tide. Every movement that happened in the world, the reason why people remember them is because of artists that made something to reflect them every time. When Covid hit, people were forced to get faced with themselves. I found my style in Covid – and I could not stop painting when I found my style, it was like an explosion, it was like my heart exploded, and I just kept dropping it on canvas.

You seem to have a certain palette that you stick to.

Yeah, it’s because I mix my own colours, I don’t buy colours pre mixed. So, I use a double primary palette—I use a cool blue, warm blue, cool yellow, warm yellow, cool red, warm red, a brown and a white. The cool and warm version of all the primary colours. I know I’m doing it the hard way, but it’s the way that they taught us in school and it’s the cheaper way. And it’s much more interesting, because sometimes I mix colours that I’ve never seen before.

Do you have any advice for artists starting out?

Start and just follow your heart. Don’t listen to anybody, just do your own thing. People will tell you that you’re selfish, etc. but people have never seen what you have to offer exist before, so nobody can tell you how it works. Only you can figure out how it works. So, you just have to do it yourself, and then you will be the blueprint for somebody else. It’s just a learning experience. There’s no right way to do anything - you just do it the way you do it. As long as you keep good intentions. Also, discipline.

Anything else you want to add?