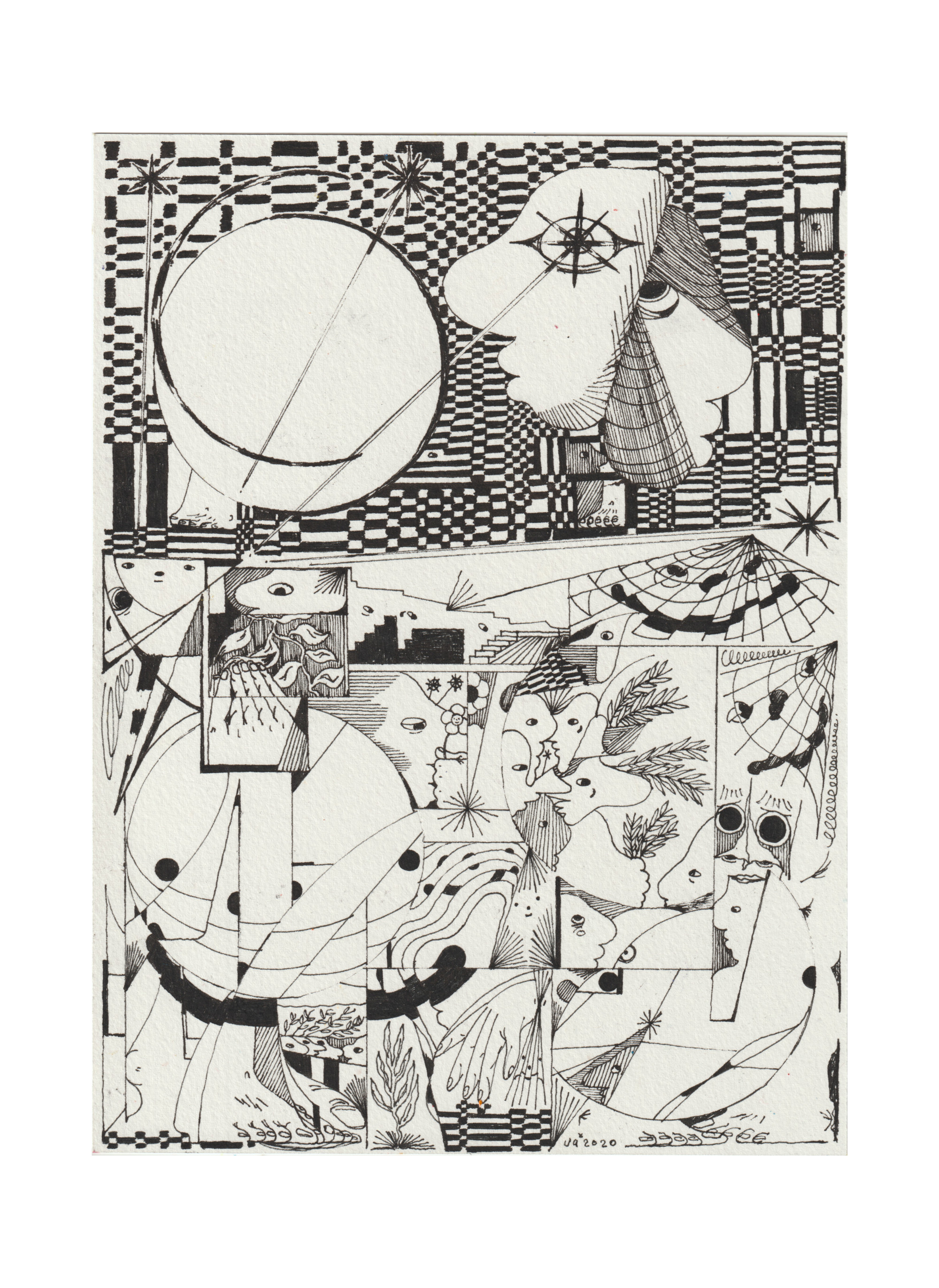 Can you tell me a bit about how you got into painting?

Yeah, I actually used to work in accounting for the government. My mom set it up… Filipino immigrant mom, like “You have to get a good job and be able to provide for your kids when you have kids,” etc. So, I did that for two years, but even after the first year, I was like, I can’t do this… It paid really well too, but it wasn’t worth the mental anguish of being in an office every single day with a bunch of older people. Which isn’t inherently bad, but like every week, there was a retirement party, and it’s so vivid… there was this banner that said “Life Begins at Retirement” and I was just like… I don’t want to live like that. After the second year, I stopped, and for a year I wasn’t sure what I wanted to do, but then my friends were like, “You should try to do something with your art!”. Because I’d always been drawing, I’ve always been making stuff... So yeah, that’s how it started.

Did you go to art school at that point?

I went to George Brown for Art and Design Foundation, a couple years after high school, but before the accounting job. I did one semester and then I dropped out. I didn’t really like school.

Were you creative when you were younger or was your practice something you took to more recently?

I was always drawing, since I was a kid, in like grade 2. I would make comics for my friends, etc. It’s always been something I’ve done. But I was never consciously like, “I’m an artist” or “I want to be an artist”. It’s just something I always did. As I become more intentional with my work, people are reaching out to me for things like commercial work, which is great, but also the fact that art has to exist within this capitalist sphere is always going to be something I struggle with - it will always be in the back of my mind.

Of course. The more commercial jobs - is that through people finding you on Instagram?

Yeah exactly. I recently did graphic work for this Chinese activewear company in Shanghai. Because of the time difference I’ve had to be up at like 2am-7am some days. And because of their internet censorship, my contact was messaging me through a hidden account or something. But yeah, they found me through Instagram.

Do you also use Instagram to find other artists to follow, etc.? Where do you find work that you draw inspiration from?

Yes definitely Instagram, but also, I have like a really, really unhealthy amount of art books at home. Like… its not good. I get them all over. When I travel, at the St. Lawrence Antique Market… There’s this guy there who has a big table of all art books. I used to go every Sunday, and when I would go, he knows me now, and I would ask him what he had that was new and he would just pull out something that he thought I’d like. I’ve been collecting books from him for so long… So yeah, mostly art books.

Do you go see art in person too?

Yeah, that too. I actually went to a show last night - Devon Pryce (@devon__pryce) at General Hardware Contemporary. He’s amazing. It’s also just so nice to meet artists you like and support them in person rather than just online.

Absolutely. On that note, how has Covid impacted your practice?

Before Covid happened, I had three group exhibitions lined up, but everything got cancelled. I wasn’t really making stuff for the past year and a half. It’s just really hard to be motivated. The last year and a half has been pretty blurry. Only recently, maybe since July, have things started feeling more normal, or at least closer to pre-Covid life.

Before Covid, I had a very rigid routine. I was supervising basketball runs at a church Wednesdays and Fridays, and then I was playing in this Chinese basketball league Saturdays and Sundays, and in between those days I was going to the gym, and in between all that I was finding time to make work. I had a very regimented schedule. But then Covid happened and there were obviously no gyms, there was no basketball, and I just didn’t know what to do with myself, you know? I was just sitting at home, I couldn’t draw, I was so frustrated trying to draw because nothing that came out would be good. 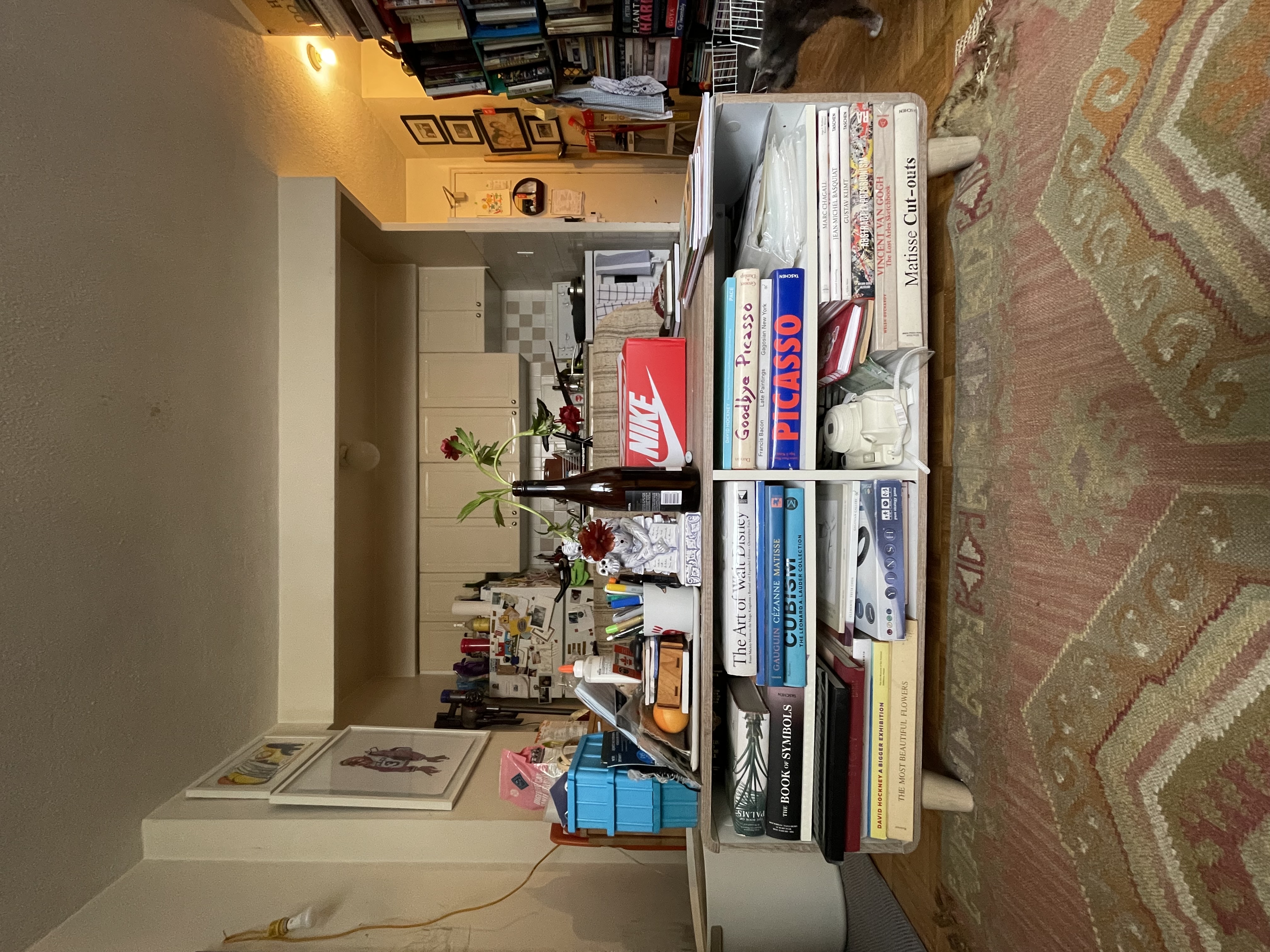 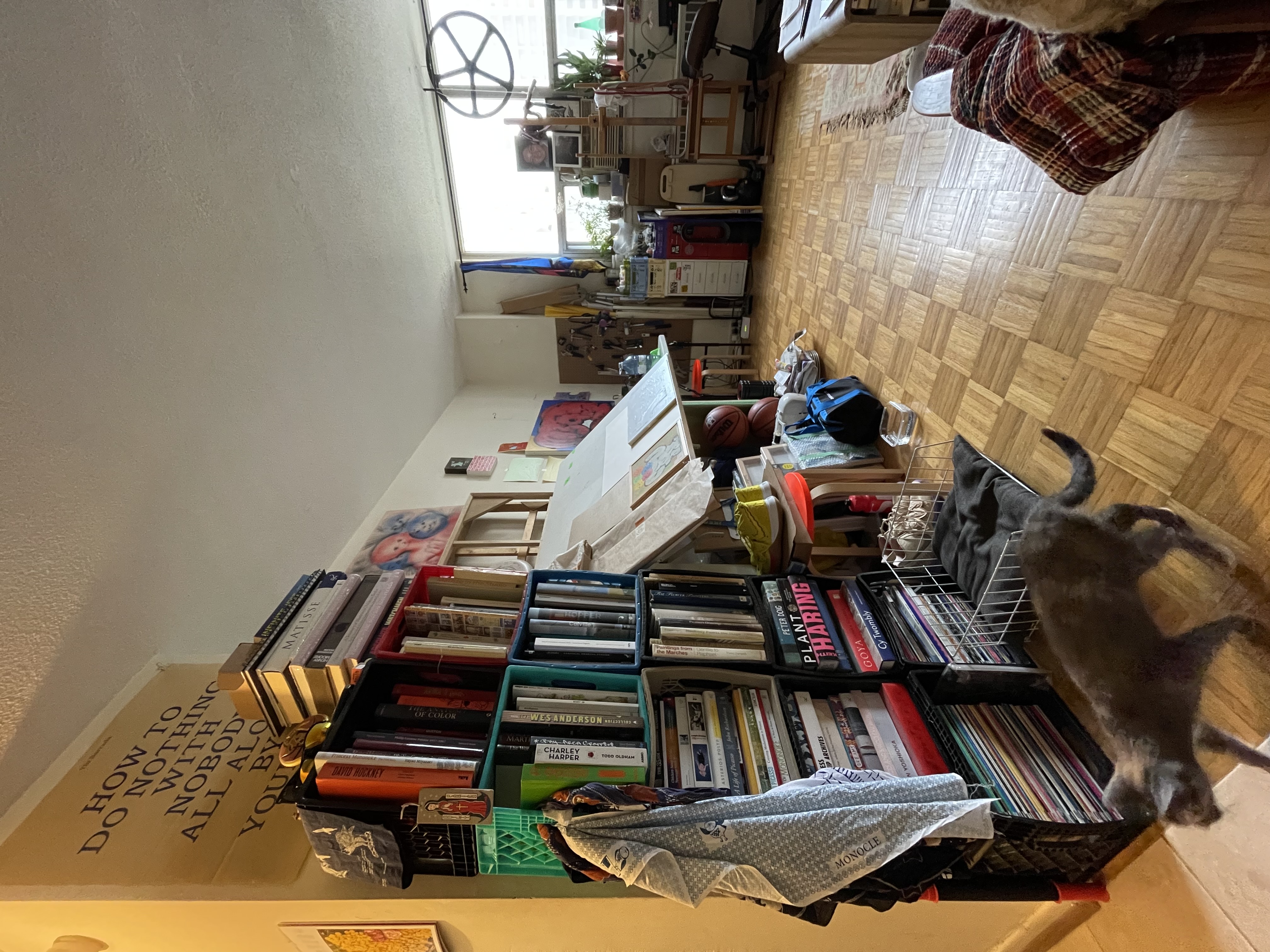 And how are you finding things now?

You mentioned you’ve done graffiti too  – do you think that has an influence on your current work?

Yeah, I have a lot of the same motifs in a lot of my work, like flowers and hands and feet, and I feel like that’s something I connect to graffiti, because when you do a tag over and over, it’s just repetition, and then it becomes your signature. So, in that way yes.

I’ve also noticed you use text in a lot of your work.

I do like to write stuff, and it’s definitely something I’ll continue to explore, but in my paintings I generally stay away from text because I feel like it’s sometimes too leading, or that having text in a piece might steer the viewer too much and I like leaving it up to interpretation. I think as soon as we put anything out there (i.e. showing work), I think at that point, it doesn’t really belong to us anymore. Like take a computer monitor, it could also be used as a cutting board, even though the maker didn’t intend for it to be used that way... It all just depends on perspective.

Do you normally draw this small?

Yeah, because it’s easy to carry around, and I tend to draw better when I’m with people. I get social anxiety, especially in large groups, so if there’s a lot of people around, I can just take my sketchbook out and draw. And my friends are really understanding and know I’ll just interact when I want to. 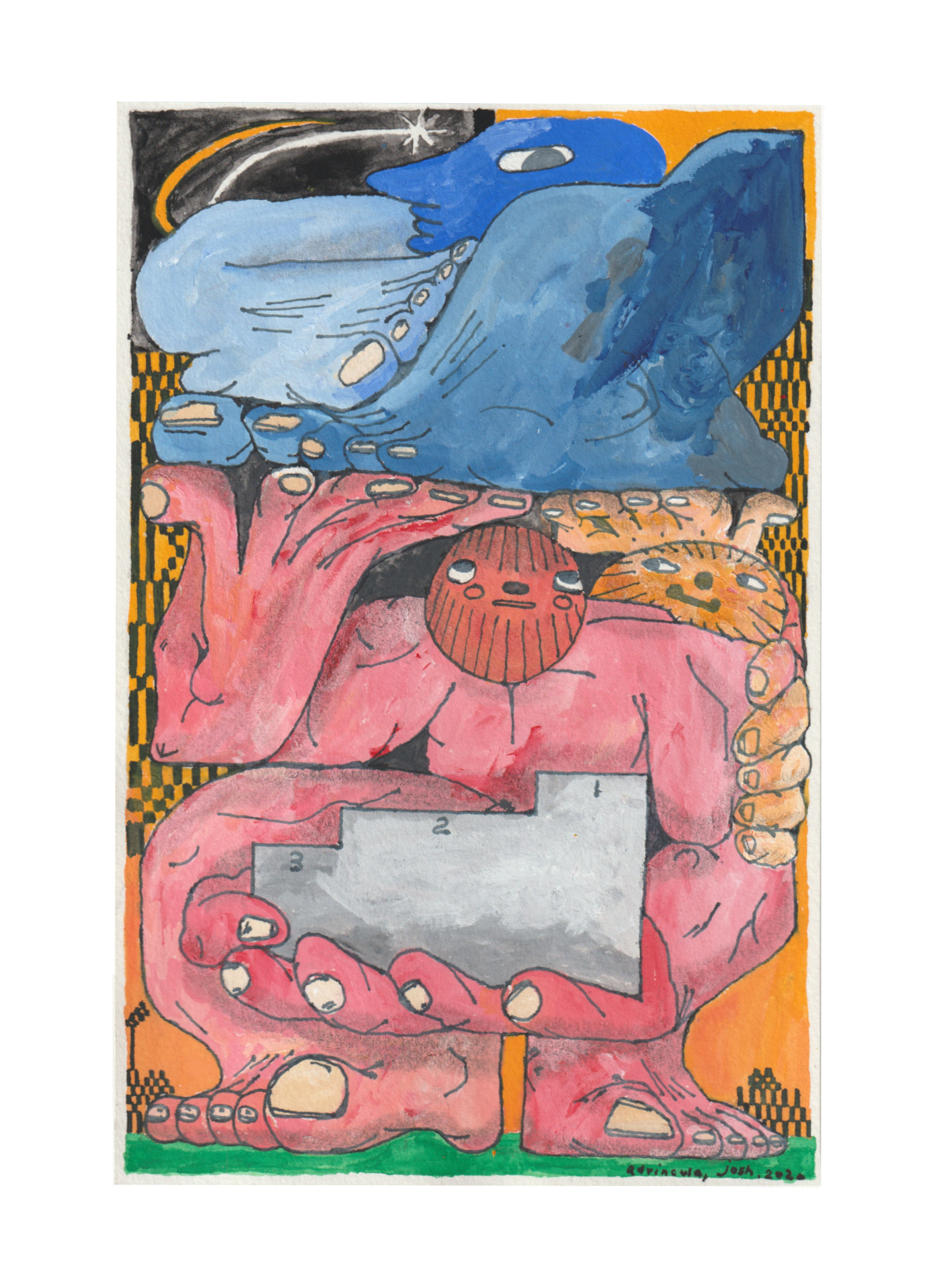 Is there anything in particular you’re finding inspiration from lately?

I think with my work and my process, it’s very like stream of consciousness… The whole reason I draw or make something is to express without necessarily thinking about it. But I guess there are things that I’m unaware of in the moment that are influencing me. My work is mostly from my imagination and also ends up reflecting stuff I’m going through - things I’m trying to figure out emotionally or interpersonally.

How has your practice changed over time?

At first, when I quit my job and had that year of figuring out what I wanted to do, and decided to make paintings and try to show them, I don’t think I had as much intention then as I do now. I think now I have more of an idea of what I want to achieve with my practice.

Do you have a sense of a dream project you might like to work on one day?

I think it would be really nice to have a big show at the AGO. Something my parents could go physically see, and then they could be like “Oh okay, this is for real I guess”. I guess that would be a dream project. And before that, just trying to break into the sphere of represented artists and collectors.

So being represented by a gallery is a goal for you?

For sure. I’d want to be represented by a gallery that also represents other POC. At the start of covid there was an infographic going around with all the major Toronto galleries and the amount of POC representation at most of them was really small, like 90% or artists represented were white artists. Hopefully the landscape will change soon… It would also be cool to be represented in spaces with other artists I look up to, like Tessar Lo and Ness Lee.

Do you have any advice for artists who are just starting out?